BY HANNAH BRYAN 810-452-2684, hbyran@mihomepaper.com CROSWELL – Thursday morning Croswell police were called to investigate a bomb threat at the Michigan Sugar factory. Though no sign of a bomb was found on the property, Chief of Police Ron Buckmaster said the plant was evacuated and shut down for the rest of the day following a full search of the premises. […]

McKenzie Health System has announced letters are being mailed to some patients whose information may have been involved in a data security incident that disrupted the operations of some information technology systems. McKenzie Health System of Sandusky first identified the hacking incident on March 11, and immediately took steps to secure its systems, launched an investigation with the assistance of a […]

WATERTOWN TWP. – Sheriff’s deputies are investigating a two-vehicle crash south of Sandusky involving a pickup pulling a wagon and a county road vehicle. The collision occurred Monday at approximately 1:30 p.m. on Miller Road near South Sandusky Road. Deputies along with the Sandusky Fire Department and Sanilac EMS were dispatched to the scene. According to the preliminary investigation, Mark […] 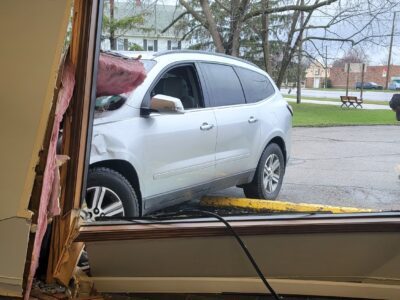 Thursday morning a driver crashed into the front of the TLC Insurance building on West Sanilac Rd. in Sandusky. Employees were inside the building when the accident occurred. There were no injuries reported. See next week’s paper for details.

Nathan Roskey of Sandusky, the director of juvenile services for St. Clair County, and Scott Forbes of Kingston, a project engineer and coordinator of environmental health and safety for Grupo Antolin in Marlette, will be interviewed on May 2. Commissioners made the decision on April 19, after reviewing the resumes of six candidates that were selected from an original list […]

SANDUSKY – At Monday night’s Board of Education meeting the Sandusky board approved the retirement of the Redskins mascot by a vote of 6-1, with the stipulation that most of the funding to pay for the changes does not come from the district’s general fund, effective at the end of the 2021-22 school year. “For me, there are a couple […] 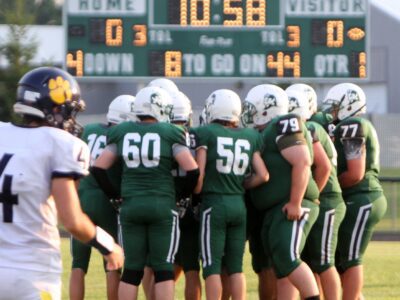 At Monday night’s Board of Education meeting, Brown City approved a move to 8-Player football for the 2022 fall season. “We think it’s by far the best move for our kids,” said Brown City Superintendent Neil Kohler. “It fits our school size now. It fits our team size, it fits our participation size and all of that, so that we […]

Category Pages are limited to 90 days. Please use the archive page or the search box to find older articles.