Police get forced entry tool in wake of more shootings 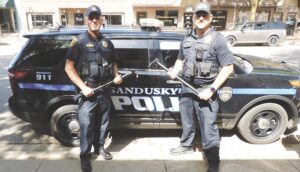 Marlette Police Chief Brian McGinnis (left) and Sandusky Chief Brett Lester display the new Halligan forcible entry bar that will be placed in every police car in the county as part of an effort to beef up school safety and security. Photos by Eric Levine

Police in Sanilac County are carrying a new tool for improved safety and security in schools.

The Halligan forcible entry bar, a tool for prying, twisting, punching and striking, will become basic equipment in every police car – local and county, thanks to a grant through the Sanilac County Community Foundation.

The bar, originally designed for use by firefighters, can be used by law enforcement needing immediate entry into a locked classroom.

A partial shipment of the bars has arrived and more are coming, as local departments add another tool to their arsenal in the wake of increased school shootings across the nation.

The most recent massacre occurred May 24 in Uvalde, Texas, when a lone gunman who had entered an elementary school shot children and teachers to death inside a locked classroom. Twenty-one students and staff died before police gained entrance to the classroom and shot and killed the suspect.

“The idea, in light of the Uvalde school shooting, is entering a locked school door – this will help, mitigating (safety and security) issues in Sanilac County, providing a quick, safer response to schools by law enforcement officers in light of emergencies similar to (Uvalde),” said Brett Lester, Sandusky police chief and head of the Sanilac County Police Chiefs Association. 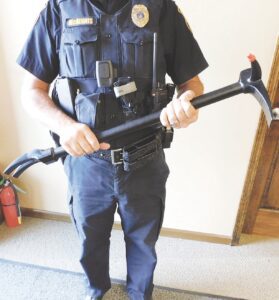 The association purchased the forcible entry bars thanks to an $8,000 grant from the Sefton-Leggitt Legacy Fund administered through the community foundation.

The heavy steel bar featuring a claw, pick and curved blade, can break through metal, glass and wood.

Brian McGinnnis, Marlette police chief and vice president of the chiefs’ association, said the Uvalde shooting on May 24, which claimed 19 children and two teachers, and other mass shootings, prompt a review of law enforcement response plans.

“It always changes,” said McGinnis. “Unfortunately capitalizing on it (to improve our plans) at someone else’s expense.”

On another school safety issue, Lester and McGuinnis reported they are continuing to work with their respective school systems in Sandusky and Marlette to place police liaison officers in buildings.

While beefing up security with officers assigned to school grounds is viewed as necessary, funding and a statewide shortage of police officers has hampered efforts to accomplish it.