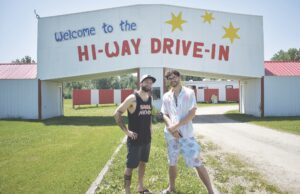 Nathan Thorpe (right) and Richard Bates (left) recently purchased the Hi-Way Drive-In on Sanilac Road, just west of Carsonville. Together they plan to revive the drive-in theater while adding new elements. They have plans to host three music festivals this year. Photo by Hannah Bryan

CARSONVILLE — Since 1948, the Hi-Way Drive-In has provided Sanilac County with a family-friendly movie going experience, and the new owners of the drive in intend to continue that tradition—with a twist.

Owner Nathan Thorpe was searching for a place to host music festivals when he came across the Hi-Way Drive-In on Sanilac Road (M-46) west of Carsonville.

Though a Port Huron native, Thorpe has worked extensively in the music industry in Nashville and Detroit. His business partner, Richard Bates, has music connections in Vegas and Broadway.

Together, their plan is to host musical festivals and events at the drive-in theater.

“I think we could do well enough (at the festivals) just to keep the drive-in open forever,” Thorpe said.

Though drive-in theaters were once popular across Michigan, now only a handful remain. Thorpe hopes their new ideas will keep the Hi-Way Drive-In available for future generations.

Thorpe had hoped to buy the drive-in last year, but kept running into obstacles. He says that former owner Steve Kursinsky was instrumental in helping him gain local support to purchase the outdoor theater.

“Steve, the old owner, made some phone calls, got Tri-County, local bank, to fund us to do this project. They love the project, the idea and everything,” Thorpe said. “They told us that they can’t wait for us to come here.”

Overall, Thorpe has been surprised by the welcome from the community.

“They’re super nice out here,” he said. “That’s why I came out here, because I was tired of the city life.”

Thorpe has only been running the drive-in and showing movies for one week. So far, they’ve hit a few technical snags, but he thinks things are running smoothly now.

“Production is very hard,” he explained. “This place is really old. If a piece of equipment goes or there’s a bad wire, it’s really hard to track down, but we got it.”

So far, they have shown a few throw-back movies. During a showing of their most recent new film, Jurassic World Dominion, Thorpe had the idea to have employees dress up as dinosaurs.

“Every movie we’re going to try to do something like that,” Thorpe explained.

Right now, he is hoping to plan a 50’s themed event to coincide with a showing of Elvis, though he hasn’t been able to confirm that showing yet.

So far, Thorpe and his crew have spent their time repairing the facilities and getting the drive-in ready for guests. The concession stands are now open and the facilities are available for visitors.

One tradition Thorpe plans to continue is the practice of allowing moviegoers to camp at the drive in overnight if they come by for a late-night movie.

“We’re trying to bring this place back to life,” Thorpe said. “This place has got a lot of history. A lot of people love this place.”

Though Thorpe hopes to honor the sentimental value of the drive-in, he has big picture plans that he believes will bring visitors back to make more memories for years to come.

“My vision is Black River Fair Grounds that offers a drive-in,” he says.

Eventually he hopes to carve out a smaller, secondary music stage in part of the wooded property he owns near the drive-in. His goal is creating a place for music festivals of all genres.

Already, he and his crew have three festivals planned for this year: Camp Carson in July, Chase N Daisies in August, and WoodKey in September.

“Camp Carson is kind of our audition festival,” Thorpe said. When inviting more well-known artists to play, the artists typically want to see a video of other bands that will be playing alongside them. Thorpe plans for Camp Carson to be an opportunity to record local bands to show larger artists in the future.

“We’re going to bring in a lot of bands. All locals,” he said. Right now, he says there will be between 30 and 60 bands and DJs of all genres.

Chase N Daises will be a country music festival, and WoodKey will have jam bands and EDM.

In addition to the festivals and movies, Thorpe has hired a director and film crew to document their progress. Right now, the crew is working on finishing an episode that documents opening week of the drive in.

The show will be on the drive-in’s YouTube channel, though it doesn’t have a name yet. Thorpe plans to create a longer biopic on the making of a festival once their festivals are completed.

The Hi-Way Drive-In is located on Sanilac Road, west of Carsonville. Movie showings are posted on the sign in front of the drive-in and on the drive-in’s Facebook page.