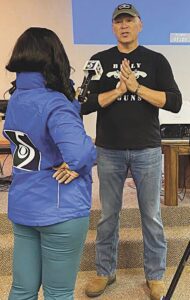 Billy Two Guns Dieckman talks to a reporter from Channel 5 News, WNEM, out of Bay City, regarding the meaning behind the name “Redskins,” at a town hall meeting hosted by the local group “Save the Sandusky Redskins logo,” on Monday at the Sandusky Full Gospel Church. (Photo by Casey Johnson)

“Fellas, what else is there to say but hail to the Redskins,” President Ronald Reagan declared from the steps of the White House on Feb. 3, 1988, after the Washington-based football team secured a Super Bowl victory.

Billeaudeaux and three other representatives traveled across the nation, coming from as far as Arizona and New Mexico, to help educate Sandusky School District residents on what the term “Redskins” truly means in Native American culture.

The representatives were invited to speak at two town hall meetings on Sunday, Nov. 27 and Monday, Nov. 28 sponsored by the Save the Sandusky Redskins logo, a local group opposed to the decision to retire the Redskins logo by the school board last spring.

NAGA was founded in 2014, and is a non-profit entity with the mission of advocating for increased education about Native Americans.

“Anyone can become a Redskin if they earn it,” Billeaudeaux said. “A Redskin is a brave on a war path. If a warrior shaved their heads, and painted themselves red, they were going into battle as they were born. … it’s an application of paint, not a race.”

He said Native Americans painted themselves red for going into battle, and also as a symbol of being willing to die for their cause.

And Redskins, he said, are a symbol – not a mascot.

A mascot is often represented by someone in a costume, parading onto the field or court in a fashion of jest. The Redskin emblem represents a person, Belleaudeaux said, who is a symbol of bravery for everyone.

The logo itself, which has adorned many sports uniforms, statues and monuments throughout the decades, was designed to represent Chief Tamanend, also known as Saint Tammany, who lived in the 1600s. He became a symbol of peace and amity in the 1800s, also becoming known as “The Patron Saint of America.”

“It is not offensive,” said Billeaudeaux, an echo of what his colleagues had already stated.

“It’s honorable to us,” said Crystal Tso, a full-blooded Navajo from the Navajo Nation. She also goes by her native name, To’ahani, or Near the Water Clan. “It’s very important that we have representation outside of the reservation so people know that we do exist.”

“The people that want to make changes are people who don’t understand,” she said. “So, we have to tell people. I am a full member of the Navajo people, and I am not offended.”

Benallie said taking away Native American names and symbols takes away an identity they have fought for centuries to keep alive.

“I want people here to know that we exist,” she said.

The group shared a plethora of national and local history, and had even researched some Native American roots in the area. Billeaudeaux spoke about how the origins of Sanilac County’s Delaware Park on M-42 has a more sinister history than the name “Redskins.” Once members of the Lenape tribe, native peoples were renamed the “Delaware” Tribe after a 16th century governor called Lord De La Warr who, Billeaudeaux said, was made famous by slaying Native Americans.

“We believe in educating, not eradicating,” Billeaudeax said of the organization’s motto. “There is a lot of tradition that most Americans don’t know about, or aren’t seeing. … The biggest fear of every Native American leader I’ve interviewed is losing their identity.”

The group collectively said their biggest regret was not being able to help educate the community sooner. Along with speaking at the town hall sessions, the representatives planned to speak at Monday night’s board of education meeting, where the new logo or school nickname was expected to be announced. Billeaudeaux said the organization was made aware of the situation last year, but received no response from school board members when they attempted to reach out in the fall of 2021.

“At the forefront of this are the children,” said Billy Two Guns Dieckman, a NAGA representative. “They’re about to lose their traditions, their imagery, their history for good.”

More information on the term “Redskins,” and it’s meaning in Native American culture, can be found online at nagaeducation.org.