Marlette to get Taco Bell restaurant

Construction to start this week 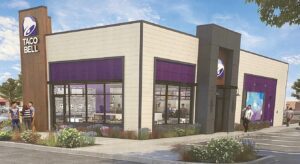 This architectural rendering is close to what the Marlette Taco Bell will look like.

MARLETTE – Ground is expected to break this week for construction of a Taco Bell restaurant, following last week’s approval by the city planning commission.

The new eatery is expected to open in October and employ about 40 people.

Officials from Great Lakes Taco, which has more than two dozen Taco Bell franchises in Michigan, met with the planning commission Tuesday, June 28 to get the final okay on the project.

Plans for the restaurant call for a 2,200 square foot building on a 1.2-acre site on M-53 (Van Dyke) at the north end of Marlette.

The location is adjacent to Golf Course Lane to the south and Ellis Insurance to the north.

The restaurant will accommodate 20 customers in the dining room and provide drive-thru pick-up.

There will be 34 parking spots including nine for recreational vehicles.

City manager Ryan Rudzis and commission chairperson Lisa Volz voiced their approval of the new franchise for the community as all requirements were met.

“Many of them would be high school age people and older for three shifts,” said the CEO.

When asked about their expected success in Marlette, Grabowski would only say, “Many of our restaurants are very successful and some less than expected.”

“M-53 (Van Dyke) is a very heavily traveled road which will probably lead to much success,” said Edwards.

He said the plan was to have shovels in the ground July 5, with the goal of opening the restaurant Oct. 1.